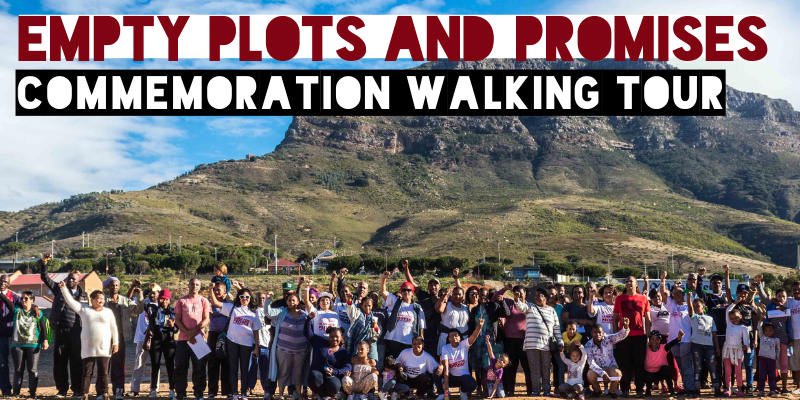 On Saturday 16 July, Reclaim the City in partnership with Ndifuna Ukwazi will host the “Empty Plots and Promises Commemoration Walking Tour” to recognise the 5th year the City of Cape Town has failed to urgently  deliver on its promise to deliver affordable housing on 11 sites in Woodstock, Salt River and the inner-city.

The walk will be led by members of Reclaim the City who occupy Cissie Gool House (CGH) and who will share their lived experiences of growing up in Woodstock, of being evicted and of taking up occupation.

Beginning at Cissie Gool House in Mountain Road, the walk will visit three of the promised sites before the screening of “City Occupied”, a documentary on the CGH occupation by Sara CF de Gouveia. This documentary is part of the international research project by the same name, [City Occupied] and which was led by Suraya Scheba from the University of Cape Town, Diana Sanchez Betancourt, Andreas Scheba from Human Sciences Research Council and Nate Millington from University of Manchester. The project also created a zine which documents the lived experience of people living at CGH: Link

To date, the City of Cape Town has lacked the necessary urgency to develop the 11 sites since 2017, and is in a protracted legal court case which attempts to evict the over 300 families living in Cissie Gool House.

This walk intends to reset pressure on the City of Cape Town to meet its constitutionally mandated obligation to adress spatial apartheid through advancing access to land and adequate housing in well-located areas. The demands of Reclaim the City and Ndifuna Ukwazi is for the City of Cape Town to urgently deliver affordable housing in well-located areas to accommodate people who could otherwise afford to live close to the inner city, and to undo the legacy of spatial apartheid.

In July 2017, the City of Cape Town promised to release 11 pieces of well-located public land in the inner-city, Woodstock and Salt River so the sites could be developed into affordable housing, including social and transitional housing. However, five years after that commitment, progress on these affordable housing projects has been very slow. In fact, only one of the projects – the Pickwick Road transitional housing project that offers temporary housing to just 19 families – has been completed; and none of the other sites has even broken ground! While some of the projects have shown signs of progress (including the Pine Road, Dillon Lane and Pickwick Road projects), most have stalled or made no apparent headway.

‘Reclaim The City’ took over Cissie Gool House (CGH) in 2017 in protest of the Western Cape Government and City of Cape Town’s failure to fulfil their promises to turn the former Tafelberg School site in Sea Point into affordable housing. Cissie Gool House is the former Woodstock Hospital, which had been closed for over two decades by then, with only small sections being used for health projects.

Most of the people living in CGH were evicted from their homes in Woodstock as a result of gentrification. In 2003, the then Minister of Finance introduced the Urban Development Zone allowance which offered tax incentives (of up to 55% of the purchase value) to gentrify areas like Woodstock, ultimately leading to mass evictions of people who had been living there for decades but could no longer afford to.

The City of Cape Town and CGH are engaged in a legal process whereby the City seeks to evict the occupiers. In the City’s phased application to the court, the last part asks for the court to order the eviction of the occupiers that are living in CGH, if it finds it just and equitable after considering all of the rights and needs of the occupiers including their personal circumstances.