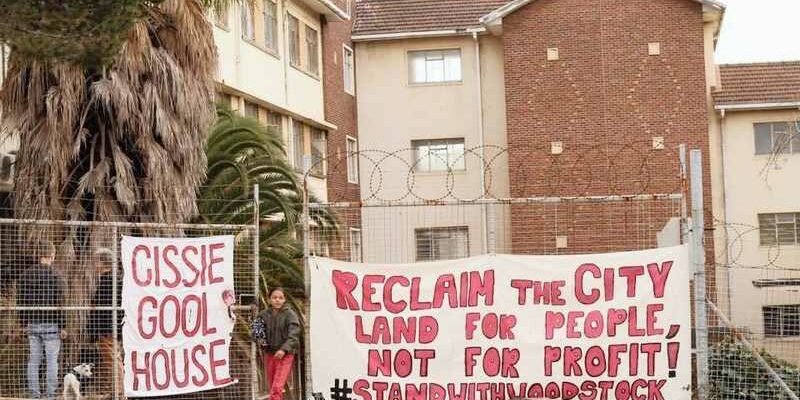 Ndifuna Ukwazi (NU) can confirm the raid and arrests that took place at Cissie Gool House on the morning of 11 November 2022. Cissie Gool House is home to  more than 1000 people.  This residence is one of the three houses under the banner of Reclaim the City, a social movement partner organisation of NU. It is home to people in need of secure housing in the inner city.

The presence of a massive police force, including many vehicles and even officers on horseback, is traumatic for people preparing for work and school, particularly twice in one year.

The following arrests were made:

The detaining of 11 people is not related to any act of public disturbance claimed by Law Enforcement as a reason for the raid, and thus we can assume that the arrest of such individuals is opportunistic. We cannot help but be concerned about their vulnerability given the level of xenophobia in our country at these times.

The scale of the raid is not justified when one considers how few people were arrested and that the majority of the 16 arrests related to immigration enforcement. Of course the residents of Cisse Gool House want to be safe and welcome action to target and arrest people who place their safety at risk. But the question has to be asked: why does the City expend such large law enforcement resources on Cissie Gool House when known gang houses and drug dens have been in operation in the surrounding area and across Cape Town for decades?  It is hard not to feel that the raids of Cisse Gool House are an attempt to intimidate occupiers and paint them as criminals, when in reality the vast majority of people living in the house are just families that would otherwise be homeless.

During the raid this morning, school children were allowed to leave the premises, while Law Enforcement conducted its operation. This is the second raid on Cissie Gool House this year.

While we appreciate the effort to combat drug-related crimes, we feel that the excessive presence of Law Enforcement and opportunistic targeting of foreign nationals has a particularly traumatising effect on the elderly, women and children, and families in this house. As the leadership of CGH we are more than willing to cooperate with SAPS and Law Enforcement. We ask that should there be another raid, that it is done in a manner that does not leave people traumatised.

Karen Hendricks of Reclaim the City.