A City of Cape Town inclusionary housing policy that was to be finalised in 2021, again delays the building of inner city affordable housing and disrupt spatial apartheid. 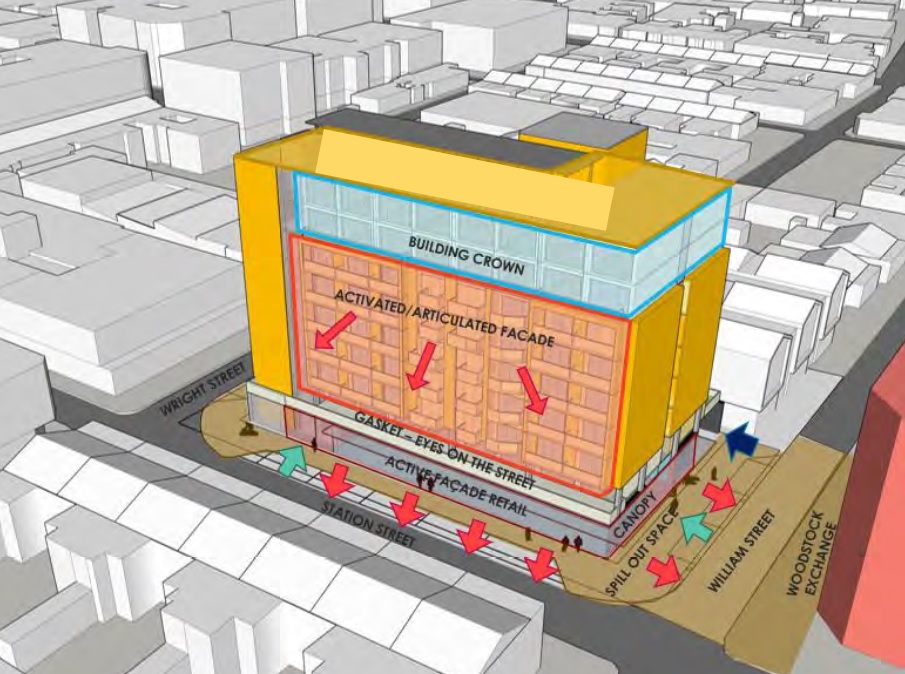 For the last five years, Ndifuna Ukwazi has been monitoring and objecting to  development  applications made to the Municipal Planning Tribunal, in order to influence large private developments in contributing well-located affordable housing.

Using existing legislation, Spatial Planning and Land Use Management Act (SPLUMA) and City of Cape Town Municipal Planning by-law, we have objected to large private developments that are unaffordable to over 75% of Cape Town’s population. Such exclusionary developments while meeting aspirations to compete globally, have deeply perpetuated historical racial and class segregation. The pressure led to 16 of private developments voluntarily agreeing to contribute to affordable housing. This is a huge step forward to building an inner city that isn’t an enclave for the rich, but affordable for all citizens. 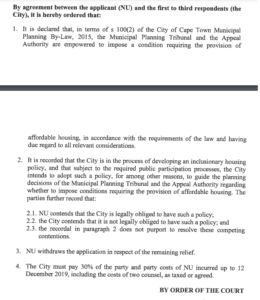 To be clear, from NU’s perspective, the current Municipal Planning By-law allows any municipality to implement and include conditions on developments. The Western Cape High Court has clarified that the by-law does not require a special policy to implement and compel private developments to provide a portion of inclusionary housing [See here for the order made by Judge President Hlope in September 2021].

Facing significant pressure,  both the City of Cape Town and the Western Cape Province have made public pronouncements to produce a progressive Inclusionary Housing Policy. Johannesburg is the only other metro with such a policy, whilst many other smaller municipalities are considering this. Despite significant public commitments, and public funds invested in financial feasibility, no policy framework has been made public.

“The political will to do what it takes to reverse the catastrophic impact of apartheid spatial planning is utterly shocking and unacceptable.  Once again, political promises are made and not fulfilled.”

Recently, development company Urban Dynamics / Moisol Investments (Pty) Ltd submitted an application to the City of Cape Town with a bid to develop a building in Station Street Woodstock into a multi-level residential development on the property with business premises on the ground floor.

In its application, the company takes cognisance of the issues relating to gentrification in Woodstock, and how suitable the site would be for affordable housing. However, the company then shirks any responsibility to address spatial apartheid in the absence of any existing policy obligating them to do so. It states in a development application published for public comment on 9 September 2022 that:

“SPLUMA and the condition of Spatial Justice regarding affordable housing, is a growing matter of interest when considering new residential/mixed used developments. Currently at a City and Provincial level, there is no approved guideline or policy for the specific provisioning of affordable housing. The Draft Western Cape Inclusionary Housing Policy Framework was developed by the Western Cape Government and published for public comment on 14 May 2021. This details thereof have not yet been finalised.”

The company willfully abandoned the inclusion of affordable housing due to the lack of policy clarity. Kumar commented:

“This lack of clarity and direction by the City of Cape Town on inclusionary housing is fundamentally anti-poor, and is purposely losing opportunities to develop well-located affordable housing”

Ndifuna Ukwazi believes in the South African context, the Municipal Planning by-law has to be applied to address spatial justice. This is yet another opportunity lost!