NU Response to Mayor of Cape Town on Affordable Housing 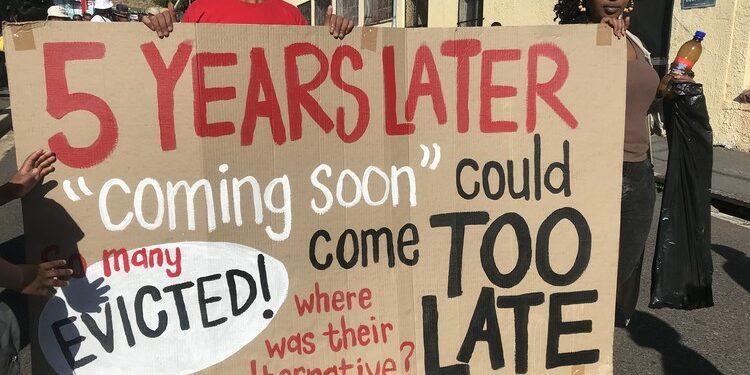 We can’t applaud the City for progress on well-located affordable housing.

It has been five years since 11 pieces of public land in Woodstock, Salt River and the inner city were earmarked for affordable housing and social housing, only today the Salt River Market site was released to a social housing company and the Pickwick Site land was released.  This is a welcome step towards seeing affordable housing on the site and we do applaud the Mayor for fast-tracking this process.  We hope to see the same effort going into completing the projects as soon as possible.

The struggle to release the Salt River Market for affordable housing dates back to as early as 2008. Fourteen years have passed since then;  the entire lifespan of someone in grade 9.

While people die, waiting patiently, on the housing waiting list, can the City really afford to take this long just to release land? These protracted delays need to be addressed systematically and accounted for.

Reclaim the City and Ndifuna Ukwazi have advocated and protested the delay of these sites every year since 2017. On 16 July 2022, the 5th commemoration of the promises was marked by a walking tour, attended by citizens across race, class and age.

As activists in this space, we will continue to pressure the City of Cape Town and the Mayor to complete work on these 11 sites and to fulfil their constitutional obligation around spatial redress.

Furthermore, it is unacceptable for the City to label citizen-led housing initiatives as illegal, where the City has failed to build well-located affordable housing. Reclaim the City’s occupation of Cissie Gool House and Ahmed Kathrada House are citizen-led initiatives in the absence of any other well-located affordable housing for the over 1 500 people living in these Houses.  The City deploys this same citizen-shaming onto those experiencing homelessness.

We must remember that the majority of people occupying Cissie Gool House have been evicted from their former homes in Woodstock, Salt River and other inner-city areas as a result of unchecked gentrification brought about by the City’s own policies and the lack of urgent state action to provide truly affordable housing in a manner which does not entrench spatial apartheid patterns.  The City of Cape Town is a respondent in several legal challenges where its acknowledgment of and approach to its obligations to address spatial apartheid is inconsistent.

After this very long and frustrating wait, we hope to welcome the relief that inner city social and affordable housing will finally be realised.